…on Victoria Station (that’s in London) for wearing rabbit’s ears, (which resembled hare’s ears, honestly, to fit in with the storyline) and handing out postcards to promote Of Night and Light, like a…well, like a MAD WOMAN. Either that or an enthusiastic writer keen to promote her book. Also know as…a mad woman. 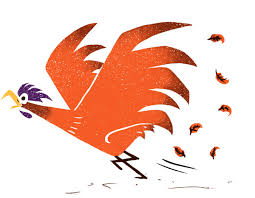 But she was wearing the wrong costume, so adopted a rabbit-caught-in-the-headlights pose instead.

Mad Woman WOULD have chickened out, except that she was waiting for a friend to arrive while wearing the rabbit’s ears.

It’s very funny how you can be standing on Victoria Station concourse wearing rabbit’s ears and NOBODY gives you a second glance. In fact, nobody gives you a FIRST glance, so wrapped up are they in their own little world of hurrying to get from Point A to Point B, heads bowed, eyes directed to the fascinating beige tiles underfoot.

That is, until you approach them wielding a postcard. Then, mostly, they accelerate.

Then Mad Woman got lucky. A couple behind a couple who accelerated with expressions that said, ‘Do not approach, mad woman!’ said, ‘Awwwwwww, don’t worry! WE’LL take one of your postcards!”

Then Mad Woman got even luckier, encountering a group of similarly mad girls… 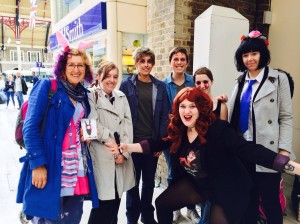 …apparently NOT dressed as zombies, as assumed,  but something to do with a TV show, which could have been Supernatural, but don’t ask me, I’m a mad woman.

They ALL took a postcard and…

Then, it was time to head off to a meeting, wrapped up in my little world of hurrying to get from Point A to Point B, head bowed, eyes directed to the fascinating beige tiles underfoot.

Only, forgetting I was still wearing the rabbit’s ears.